The effect factory farms have on health, animals and the planet 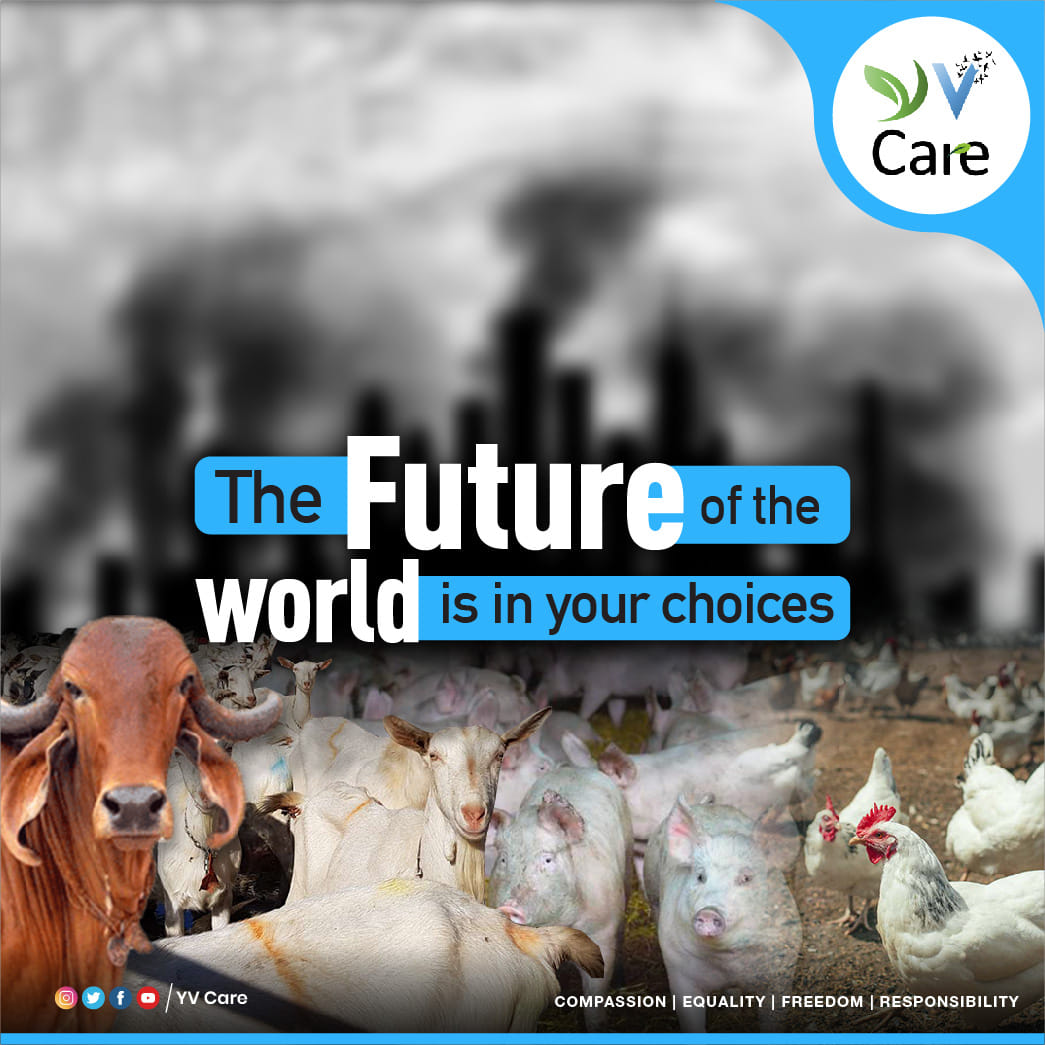 In today’s world, a barn feels more like a farm of animals where they are treated like crops. They are grown, fed and bathed together only to get slaughtered together. Many multinational companies in the domains of clothing, cosmetics, food, etc. try to make maximum profit by rearing animals and their byproducts in a quick and cheap manner. Animals are not recognized as living animals here in these farms as they are bred to grow so fast that their hearts, legs and other organs can hardly keep up with the pressure of the excessive weight of their bodies. In factory farms, it’s not a rare sight to see the dead scattered among the living on the floor amongst their excreta, while others are slowly doomed to live the same fate. Animals here in factory farms are not given individual care or any veterinarian visits as their body is not considered worth a veterinarian’s bill.

Factory farming is the industrialized, intensive farming of animals. By keeping them in unnatural conditions, and dark and dingy cages, the animals are not allowed to develop their natural behavioral patterns.

Factory farms originated in the United States as it was founded as an agrarian society. Initially, farms were small to medium in size and allowed animals to roam freely, much like the jolly good ‘Old McDonald had a farm’ nursery rhyme. In India, over 90% of chickens raised for meat (broilers) are raised on industrialized factory farms. Chicken meat consumption is growing at a rate of over 15% per year and this only encourages more factory farms to come up. Ever since India’s white revolution, the dairy industry in India has flourished. India has become the leading beef exporter by slaughtering and exporting meat from cows that have been considered “unfit” by the dairy industry. We might have an image that in India, animals are not raised in a bad environment and harmful factory setups like the rest of the world. This is a false notion. Being inspired by the western trends, there have been more and more factory farms being established all over India to maximize profit. With about 155 million tons of milk produced according to data collected in 2015-2016, India’s animals are at a huge risk of factory farming cruelties.  Today, factory farms carry around 94% of all animals farmed for human consumption1.

Factory farms, as discussed above, are favored highly by very wealthy and influential MNC corporations. Their only objective is to yield maximum meat and other byproducts at a profitable price. Since fast food companies purchase from these factory farms, they, in turn, encourage these farmers to expand and continue working with this model of farming. Factory farms, in this manner, supply the fast-food industry’s demand for an abundant quantity of animal products at the cheapest rate possible. The factory farm set up also clusters many animals together in a cell that saves space for the farmer but cripples the animals. The animals are also pumped with growth hormones and confined to cages to minimize movement so to yield more meat from them. There is absolutely nothing ethical about animal farms, they have just one objective, and that is to maximize profit. 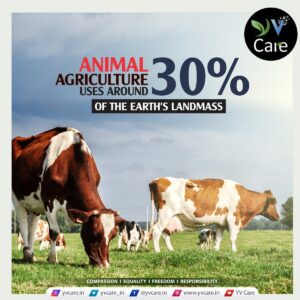 According to the UN, raising animals for food is one of the largest contributors to greenhouse gas emissions. As demand for animal products is growing, animal agriculture has gobbled up water, energy and land. Vast expanses of natural habitat and forest land around the world are being cleared to grow crops to feed farm animals in these factory farms. Data2 suggests that animals are fed six kilograms of plant protein to get an output of 1 kg animal protein3. It is bizarre to notice that animal farms use up way more food than they produce, which leaves less food for everyone else. This overfeeding of farm animals is not only bad for them and the environment but also denies food or trivializes the unavailability of food for the 1 billion malnourished humans on our planet. The cereal which is used to feed the animal farms right now is enough to feed about three billion people3. 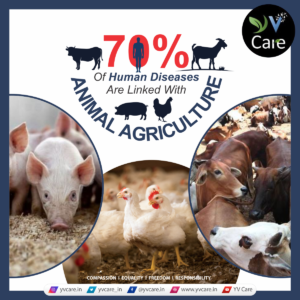 “Factory farming is a perfect storm environment for infectious diseases,” says Doctor Micheal Greger, author of a popular book on the topic of bird flu. This brings us to the topic of how factory farming breeds deadly viruses and epidemics. It is safe to note that the factory farming conditions and antibiotic-resistant pathogens that arise due to pumping growth hormones and other antibiotics in animals for more yield can cause a threat to humans in the form of diseases. By taking the Coronavirus as an example, it is safe to say that illegal animal trade and wet markets have been singled out, yet factory farms are still not deemed as problematic. It is necessary to pay more heed to the public health risks that factory farms can cause before it’s too late.  Animals carry harmful germs, viruses, bacteria, or even parasites that can cause illnesses. These are termed zoonotic diseases or zoonoses. Around 60% of all infections in human beings are of this type. In a report conducted in 2017, it is said that 75% of emerging diseases will be of the same type as well. In our country, diseases such as swine flu and bird flu have caused havoc, and this is because of the viruses and bacteria that are found in slaughterhouses and the filthy conditions they are kept in. Our demand for meat leads to animals being slaughtered on blood and excrement stained floors and transported in even filthier vehicles. This creates a perfect breeding ground for many diseases, and we have a slice of this on our plates every time we eat meat.

Leading water and climate scientists, as well as the United Nations, agree that reduction or prevention of eating meat can reduce the demand for such factory farms, and in the long run, play a positive role in reducing pollution. Some viable options include stopping your intake of unsustainable meat altogether or looking for vegan substitutes of meat (Mock Meat). Going vegan is the best choice if you plan to stop factory farming altogether and do better for the environment and animals.

We are at a critical point in history where decisions and lifestyle choices affect globally and can cause problems for animals, humans and even the environment. Remember, the choice we make at our dinner table affects many other humans and animals alike. 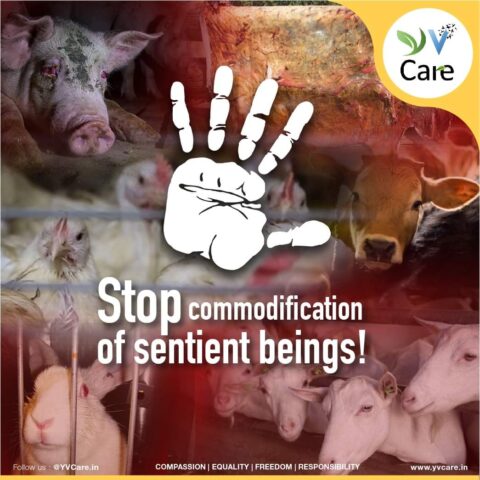 Factory Farms: A Look Within 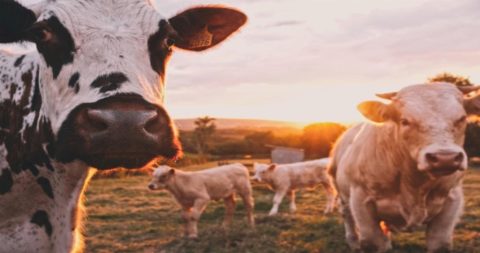 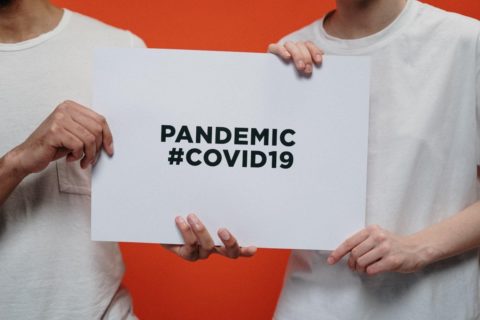